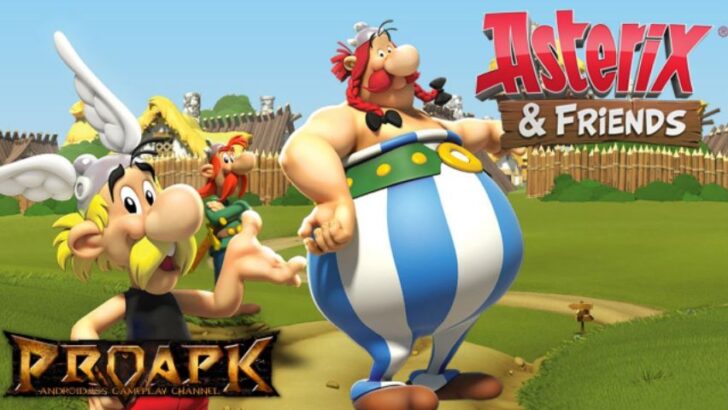 Asterix & Friends is a free resource management style single-player game that features the Asterix comic book characters. This game was created and launched by GameXcite GmbH in 2016. Plunge into the world of heroic Gauls, Asterix and Obelix and their friends. Create your own village, gather resources and face Roman invaders.

Check out our Asterix & Friends review to learn more about the main aspects of the game, its plot and gameplay and find out whether the game is safe or a scam.

Asterix & Friends gameplay is incredibly entertaining and will keep you occupied with rebuilding the destroyed village and returning it to its former splendour. In addition to managing settlements and repairing buildings, you will also need to collect resources, fight other players in PvP battles and extend your territories on the map.

The main goal of this video game is to reconstruct the demolished village after an invasion by the Roman army led by Julius Caesar himself, protect the residents and create your own powerful army to fight back the invaders. Additionally, from the early stages of the game, you will need to collect the resources such as wood and stone to improve the buildings in your town, create weapons for your army and complete quests. Besides, you will have to supply food for the villagers by hunting and fishing.

Early in the Asterix and Friends game, the player is tasked with rebuilding the village and reintroducing its six inhabitants: Lunatix, Democratix, Ironix, Baltix, Lyrix, and Statistix. The game’s main character is called Pointandclix. The player can only move him and use him to gather raw resources. Obelix and Asterix have a very minor part.

By completing quests, collecting experience points and progressing through levels, the player advances through the game. In addition to running the village, the player can assist Edifis and his crew in Alexandria as they work to restore the Palace.

There are some quests that can only be finished once, while others keep repeating over time (marked with a spinning arrow).

Asterix & Friends is a single-player game where you have control over the game and the choices that contribute to the plot development. However, there is also a local multiplayer mode which allows players to play with family members and friends.

The Asterix & Friends gameplay takes the player in the year 50 BC, when the Roman Legion had already conquered all of Gaul, except for a handful of villages that continued to resist the Romans’ rule and caused them constant trouble. The Roman army destroyed nearby villages that had refused to pay taxes to their Roman “rulers” on the orders of Emperor Caesar. The most fearsome Gauls to ever take on the might of Rome, two legendary warriors named Asterix and Obelix, have been asked for assistance by these homeless refugees.

The player must send the villagers with sufficient strength to attack and engage in combat with the Romans. The player’s strength is increased by weapons, their damage is reduced by shields, and their recovery time is accelerated by headgear. The villagers can only have one item equipped at a time in the beginning, but as they advance in training, they can have up to three items equipped at once.

The player can send Asterix or Obelix to battle the Romans if they have completed the quests The Great Banquet or Visitor Attraction. Although Asterix and Obelix will always win, they can only be used once before finishing the quests all over again and cannot wear any equipment.

The Asterix and Friends game is completely free to play and download. However, the game comprises microtransactions for players who want to purchase some in-game items for real money.

There are three main types of currencies in the Asterix & Friends game. The primary form of payment in the game is sesterces. These coins are required for purchasing building decorations, building outposts and lengthening their stay, sending resources to Alexandria, altering the Village Brawl opponent, and establishing a guild.

The secondary virtual currency is Roman helmets. They are required to increase the Inventory and purchase goods, services, and food, omit waiting periods and build permanent outposts.

The tertiary unit of exchange is the Resistance Points which are earned by fighting Romans and may be used for training villagers. In addition, they are produced by Alexandrian Palace and Gaulish outposts.

Asterix and Friends game holds special events such as The Race Through Italy and Centurion Punch Tournament. Players may take part in those tournaments and complete the specified tasks in exchange for lucrative prizes and rewards.

Where To Play Asterix & Friends

Since Asterix & Friends is a cross-platform game, it allows you to play it either on a PC or a mobile device with an Android or iOS operating system. As the game does include the cross-play feature, players may use different video game hardware to play with each other simultaneously.

For the game to run smoothly on your PC, make sure it fully complies with the requirements presented in the table below:

Those who prefer playing games on the go, may install the Asterix & Friends game app for free from the App Store or Google Play Market. Successful app installation requires an Android device that runs on a 4.0+ version with at least 200 MB of free space and 1 GB of RAM.

The Asterix And Friends game has a 4.6 rating out of 5 in the App Store and 4.1 in the Play Market, meaning that a great number of people actually enjoy playing it. The majority of players like the game for its high-quality visuals, exciting gameplay and extensive reward system. However, some gamers dislike the regular updates that are required to prevent errors and other technological problems. Moreover, a small number of players state that it is quite difficult to collect sesterces.

If you are fond of strategic town-building games, here are some alternatives for you:

You may play and install a safe and legit Asterix & Friends game on your PC using the official website of the game. Android mobile device users may find the game in the Google Play Market, while iOS device users must go directly to the App Store and install the game app from there for free.

You may install the game from the official website of the game or use a Play Market or App Store marketplace based on the device you use.

What Are The System Requirements For Asterix & Friends Game?

The table with recommended system requirements is presented above in this article.

What Is The Price Of Asterix & Friends?

The game is free-to-play. However, to progress through levels and win, players may need to make optional in-game purchases.