Battle for the Galaxy Overview 2022 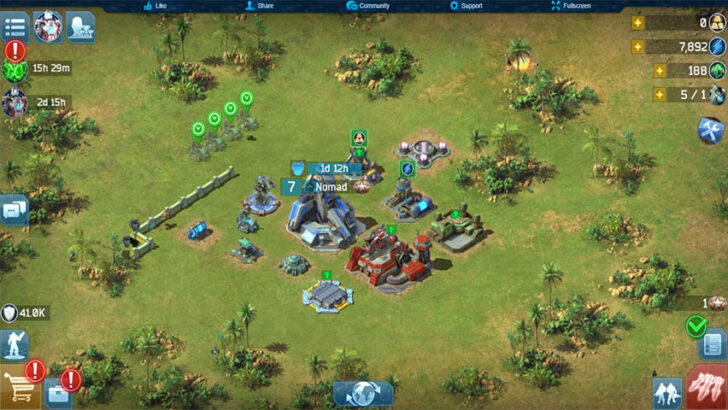 Battle for the Galaxy is a massively multiplayer online strategy game that has many similarities to Supercell’s smash-hit 2012 release Clash of Clans, barring the sci-fi aesthetic. The game is yet to reach the astronomical commercial heights of Clash of Clans, though it has still been a roaring success, best exemplified by its 10M+ downloads. You can also download this game from the official website. Battle for the Galaxy allows players to manage the development of their space outpost, protect it from their opponents as well as attract their outposts.

About Battle For The Galaxy In 2022

Battle For The Galaxy: Gameplay

Battle for the Galaxy starts with a short tutorial that introduces players to the game’s core mechanics and features. The tutorial is clear, concise and wastes little time getting players into the action.

If we could only describe Battle for the Galaxy’s gameplay in one word, it would be “streamlined.” The game doesn’t waste time with overly complex lore or unnecessary fluff; it gets straight to the point with brief descriptions for every unit, building and upgrade, along with their possible actions visualised with simplicity in mind.

Base building has been a core part of the strategy genre since it was popularized by the iconic Age of Empires back in 1997. There are a wide range of buildings in Battle for the Galaxy game that can give players an edge in battle.

Resource buildings are arguably the most important in the game, as resources like Energy and Titanium are used to make purchases. Storage buildings, as the name suggests, let players store these resources. Builders, on the other hand, complete constructions for the player. Builders can only work on one project at a time, though players can have up to five builders.

To keep their base as safe as possible, players have a wide range of defensive buildings that they can unlock and construct. Defensive structures in the game include anti-air towers, plasma traps and walls.

Offensive buildings like the Starport and Corporate Headquarters are pivotal in the player’s quest to take down enemy bases. Offensive buildings offer a variety of perks, such as letting players take more units to battle and reducing their production time.

Research buildings like the Academy and Heavy Vehicle Factory give players the chance to unlock more advanced upgrades that will help them defend their base and be stronger in battle.

Units in Battle for the Galaxy game are deployed around enemy bases and are key to successfully destroying and looting them. As such, the more time players spend upgrading their units, the stronger the bases that they will be able to conquer and the more loot they can gain. Units come in three main categories: Infantry, Light Mechanical and Heavy Mechanical.

There are three types of Infantry units available:

There are four types of Light Mechanical units available in the freemium game:

There are three types of Heavy Mechanical units available:

Battle for the Galaxy has an impressive range of game modes, including Duel, Base Defence and Game of Corporations. The variety in modes keeps the game interesting and ensures that it never gets stale.

The main aim of the game is for the player to build a powerful base that is defensively solid, generates as many resources as possible and creates powerful offensive units that can take down enemy bases.

Like many online multiplayer games, Battle for the Galaxy puts players in leagues to ensure that they are only competing against people on their level. The game’s league gives players something to work towards and also rewards them with items like Antimatter and Hero Cards.

Battle For The Galaxy Tips For Beginners

For those who like the sound of the game but want some pointers before getting started, here are some Battle For The Galaxy tips to help you hit the ground running.

Be patient with purchases. Although it can be frustrating having to wait so long before making your next purchase, it’s worth doing so as continuously making small, meaningless purchases for the sake of it will stagnate your progress.

Prioritize resources. To help speed up the purchasing process, it’s best to work on upgrading buildings like the Energy Generator and Titanium Mine. It will take a while to start reaping the rewards of these upgrades, but it will pay off in the end as players start receiving bucket-loads of resources every hour.

Battle for the Galaxy has an excellent tutorial that gives players a quick 10-minute overview of the game; making it quick and easy for players to decide if it’s for them or not. Do not waste any time, download the game now and start building the winning strategy right away!

Other games like Battle For The Galaxy to try:

Battle for the Galaxy is a solid MMO strategy game that we recommend to anyone who enjoys Clash of Clans and likes the idea of a sci-fi spin on it. The main problems with Battle for the Galaxy are standard issues that come with a freemium game, such as long wait times for upgrades and a pay-to-win model.

However, for those who are fine with the freemium model,  AMT Games’ strategy title is certainly worth a try for its impressive graphics, streamlined gameplay that gets straight to the point and solid range of buildings, units and upgrades to unlock.

Is Battle For The Galaxy Free?

It is a freemium game. This means that it’s free to play, but there are numerous in-game purchases that can give players significant upgrades instantly.

Which Platform Is Battle For The Galaxy Available On?

Battle for the Galaxy is available now on PC, iOS and Android.

Is Battle For The Galaxy A Multiplayer Game?

Yes. The game is an MMO, which stands for Massively Multiplayer Online. Players can fight against each other and talk using the in-game chat function.