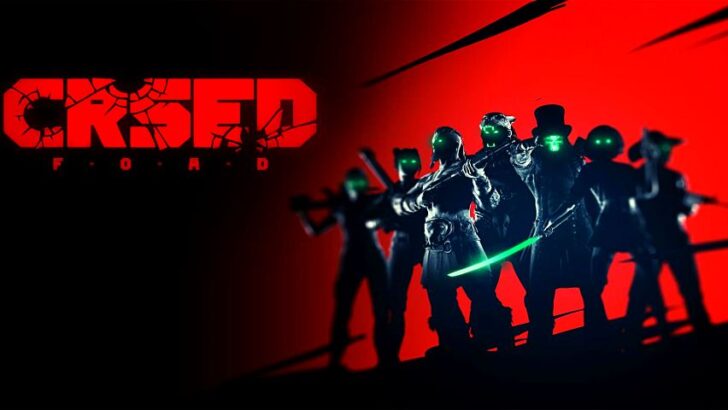 CRSED: F.O.A.D. (Cuisine Royale Second Edition: Fulfillment of All Desires) is an online massively multiplayer last-man-standing shooter that has extraordinary superpowers, lethal mystic force aspects, and realistic weapons. On December 19, 2019, the game was formally released by Gaijin Entertainment as Cuisine Royale. However, in 2020, it was re-released under a new name.

Read our CRSED: F.O.A.D. review and find essential information about this game’s storyline, characters, and features.

Enjoy the fascinating CRSED: F.O.A.D. gameplay and win by using all of your combat prowess and experience. Dash into a gunfight or crawl undercover, snipe from a distance or burst at close range and rely on accurate bolt-action rifles or a quick heavy machine gun.

CRSED: F.O.A.D. multiplayer forces players to battle one another until only one is left standing on a map that is encircled by a decreasing ring of death. Players use the equipment, tools, and vehicles they locate on the map. Unlike in previous battle royale games where there is no parachuting or insertion phase, in CRSED: F.O.A.D., players spawn randomly across the map as soon as matchmaking is complete.

The CRSED: F.O.A.D. game starts with choosing the main character and a game mode. Eleven pre-made Champions are available in CRSED to choose from, each with its own backstory, fighting abilities, and advancement tree that rewards new skills as you advance. The way you approach each game with these characters is highly customizable, and they may be decked out in brand-new clothes and skins from the store.

At the initial stage of the game, you should also select the type of map where the competition will occur. A total of 4 are available – winter and summer Normandy, Siberia, and Mexico. Note that you can play alone, with a partner, or as part of a team of up to five people.

You have the option to play in the first or third person. Every player is familiar with a camera that can reveal the location of a player who is peering around a corner in order to counteract the latter’s potential advantage.

The CRSED: F.O.A.D. gameplay features several modes, including practice mode, squad play, solo, and duo play. A Solo play implies a deathmatch where each participant battles by themselves. Duo play is available only for the PC version of the game and foresees battles for 2-player teams. Battles for 3-player and 4-player teams are known as Squad.

The game features massive PvP battles, where the number of players in each session can reach 40. You have a chance to play with your friends in Duo and Squad modes once you add them to your friends list using the contacts in the main menu of the game.

At the beginning of the match, each player appears randomly without weapons or armour. They have to find ammo on the map during the battle. Sometime after the start of the fight, the map starts to shrink, surrounded by the Dark Zone. If the player is outside the active game area, their character constantly loses power. In this way, users move towards the center of the ever-shrinking zone, collecting equipment and fighting opponents encountered along the way. The CRSED: F.O.A.D. game ends when one player or squad is left alive.

While all the weaponry in the game is based on real-world ones, players can also employ supernatural tools (such as health-boosting cigars or lunar gravity boots) and abilities (i.e. zombie summoning or temporary invisibility).

The majority of skills (known as “signs” and “rituals”) can be acquired by playing the game diligently. However, some rituals are exclusive to one of the Champions.

In CRSED: F.O.A.D., players may use mysterious powers to throw hex bags at adversaries, perform rituals from long ago, draw seals with blood, etc. They can flood the entire map, bring about a solar eclipse, put up traps, call in zombies, or transport everyone out of the map. To pay for the majority of luxurious abilities, one must first collect sinner souls by killing adversaries.

The CRSED: F.O.A.D. is a free-to-play MMO shooter. The game allows for microtransactions to buy a Battle Pass and Golden Crowns from the in-game store to make new items for your character’s further customization.

The in-game virtual currency is Golden Crowns, which you can buy with real money. Golden Crowns may be spent on a Battle Pass, which enables you to complete more tasks and earn special rewards. Moreover, players may purchase exclusive clothing and skins from the in-game store and acquire new mystic powers for their character by exchanging to Eternal Grace.

In addition to a system of daily duties and covert missions that rewards players with exotic equipment and abilities, the game frequently hosts special events with new battle configurations and regulations.

In the game, loot boxes look like refrigerators of different colors, such as white, red, etc. They can be found on the battlefield and obtained for free. Inside each loot box, one may find a random set of items, including food for recovery, weapons, transport, ammo stocks, inventory bags, cuban cigars, oxygen tanks, etc.

You may play CRSED: F.O.A.D. on PlayStation 4, Xbox Series X/S, Nintendo Switch and PC. To access the game, you may use the official site of the game and platforms such as Steam and Epic Games.

Since the game is cross-platform, its cross-play feature allows players who use PlayStation and Xbox to play alongside their friends via different platforms.

Similar to any other popular MMO royale shooters, CRSED: F.O.A.D. collects both positive and negative reviews from players and critics. Game features that are highly appreciated by thousands of players worldwide are eye-catching realistic visuals and sounds, the addition of mythical elements to the game, a variety of rare weapons with unique magazines and improved game performance due to regular updates. As to the game’s drawbacks, players are mostly concerned about the game’s movement system. Moreover, the dedicated fans of the initial game version – Cuisine Royale, dislike the fact that the majority of the jokes were removed, and the cooking theme of the game was largely disregarded by the developers.

If you want to try something new instead of CRSED: FOAD, we recommend that you pay attention to the following alternatives:

You can download the game via Steam and Epic Games platforms, as well as the developer’s official website. Check if your PC complies with all the game’s system requirements, and if it does, you may easily download and install the game client on your PC.

As CRSED: F.O.A.D. is legit, you can play this game on the main consoles such as PS, Xbox, and Nintendo Switch by downloading it from the corresponding online marketplace.

You may install the game from Steam platform, Epic Games, and the official website of the CRSED: F.O.A.D. game.

What Are The System Requirements For CRSED: F.O.A.D. Game?

You will find a table with system requirements above in our CRSED: F.O.A.D. review above.

The game is free to play.