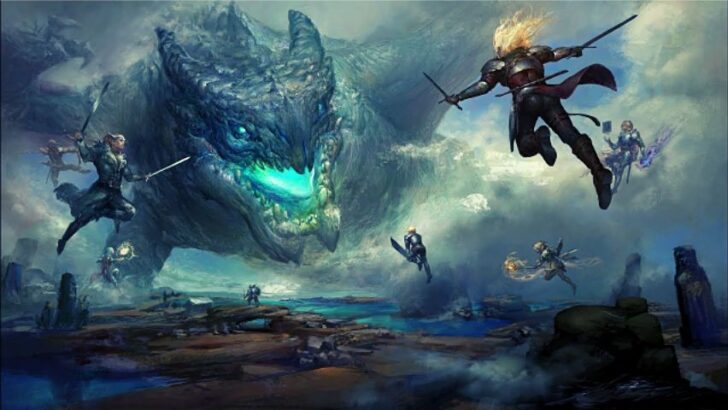 Dragon Lord is a browser-based fantasy MMORPG game that was created by Esprit Games and launched by 7Road in 2017 for PCs that run on Windows, Mac, and Linux operating systems. Play the game to conquer mighty dragons in the huge realm of Dragon Lord, where orcs, elves, humans, and dragons struggle across limitless lands.

Read our Dragon Lord review and learn more about the game’s automatic gameplay, possible modes and main features of the game.

The majority of the Dragon Lord gameplay is automated, except for multiplayer dungeons. But all single ventures happen automatically. You may either turn it to auto and watch as your party is decimated, or you can select to queue up attacks with your main hero. However, there is some strategy involved, particularly when attempting to optimize the power of both your character and party.

The main objective of the game is to create a magnificent city that can withstand any threat along with one-of-a-kind and lethal weapons to defeat elves, orcs, and dragons and bring the draconic empire down. To accomplish the goal, you must assemble an army of heroes that may range from crafty witches to fire-breathing dragons. In addition, you need to utilize powerful magic and skill combinations to tame sturdy dragons that embody the powers of Ice, Earth, and Fire.

The Dragon Lord MMORPG gameplay allows you to put your skills to the test as you embark on difficult quests requiring you to slay fearsome enemies.

First, you need to create a game account. Once it is done, you have to select the gender of your character. This is merely a cosmetic option and has no bearing on the character progression mechanics. After selecting the character’s gender, you will see a cut-scene starring your character that will introduce you to the fantastic yet serious world. The game’s developers concentrated on a series of tutorial quests that will teach you the fundamentals of the game.

It is suggested that you select one of the main characters:

Every character comes with a set of their own set of armor, special abilities and fighting style. Several qualities can be immediately improved, such as attack and defence skills, spells of dark attacking magic and the knowledge of white healing magic.

The heroes’ development is essential for progressing through the game. The first and most obvious way is to gain new experience levels. To boost it, you need special hero scrolls that you can obtain during missions or by performing daily tasks.

As was mentioned earlier, the part of the Dragon Lord gameplay is automatic, which means you may be a spectator of the battles or participate in the PvE battles as well. Moreover, as the game is an online massively multiplayer, you have a chance to join a clan and go on adventures with other players. In the PvP arena, you will face off against other players and participate in global events with your friends and allies.

When you first enter the Dragon Lord MMORPG game, you will be pitted against a boss dragon as a part of the tutorial. By completing these quests, you will learn the fundamentals of the Dragon Lord world and obtain your first dragon. During leveling, your character will gradually evolve, learning new skills and abilities. Because the skill tree can be changed at any time, you can change the character’s battle style and try again after an unsuccessful battle with the boss. The battle rating of the character influences its strength. You can boost this indicator by improving your hero’s skills. With such a well-developed skill system, you can fully enjoy the combat portion of the game.

Dragon Lord battles are turn-based which means that once it is your turn, you may select the abilities that will be used by your character. You can also enable the automatic battle mode, which allows the game’s AI to fight for you in combat.

You can hire the Heroes at the tavern if you want to fight with allies on your side. They all come from different backgrounds, classes, and abilities. Before the battle begins, you can rearrange the Heroes, putting Tank heroes in front and powerful Damage-dealers behind the backs of mighty defenders. There is also a cell dedicated to the dragon that is impervious to all forms of damage.

The Dragon Lord game features six different types of dragons in the game, and you will receive your first one after reaching level 3. Because you can have multiple dragons at once and only one can be placed on the field, you can instil these creatures’ abilities in your heroes.

The Dragon Lord MMORPG is free to play and download, but it does include a few microtransactions that players can use to get extra content and upgrades for their characters in exchange for real money. Such microtransactions may help players to boost stats as well as get convenience items like gems that are able to unlock time-limited events faster.

Gold and diamonds are the game virtual currencies. They are obtained through arena battles, quests, and collecting tribute from buildings. The majority of the items can be purchased with gold. Diamonds rarely fall out as they are the premium currency, so they are usually purchased with real money. They can be obtained for free by completing extremely difficult tasks and as a daily entry reward. Players may use them to get cosmetic items and equipment, or you can subscribe to a VIP account to receive additional bonuses and daily rewards.

To receive interesting and useful rewards, Dragon Lord players need to participate in special game events. For example, the Boss Carnival event requires players to purchase hammers to be able to defeat bosses. As a reward, players get a certain amount of points that later could be redeemed for Wooden/Golden/Iron Hammer and Hero Development Stones.

Sky Chest Event implies players opening the map and teleporting to the Holy City. During a limited period of time, gamers can find 10 chests of different values, including Silver, Golden and Pandora’s Chest.

Where To Play Dragon Lord

As was mentioned at the beginning of our Dragon Lord review, Dragon Lord is a browser-based MMORPG that was released for PCs that run on Mac, Windows, and Linux operating systems. Therefore, using any up-to-date web browser, the game may be easily accessed on the official site of Esprit Games. Since Dragon Lord is legit, you may also find the game on the most popular video game distribution platforms.

Note that the game is not cross-platform, which means the absence of the cross-play option.

The Dragon Lord MMORPG game can boast of a large number of positive reviews on multiple legit, top-rated review platforms. Adventures, exciting quests, epic battles and role-playing mini-events abound in the fantasy world. The developers are constantly releasing updates in order to keep the game interesting and varied, which attracts thousands of players. Magnificent visuals, PvP arena and multiple character development opportunities are among the main game features.

The fans of Dragon Lord multiplayer will not be disappointed by trying to play one of these alternatives:

To download the Dragon Lord game launcher for Windows or macOS, visit the official website of Esprit Games, locate the green button that says “Esprit Games Center” on the home page. Based on the browser you are currently using, you will either have to save the file or the installation process will start automatically.

What Are The System Requirements For Dragon Lord Game?

We have prepared a list of system requirements above.

What Is The Price Of Dragon Lord?

Dragon Lord is a cost-free game to play and download.