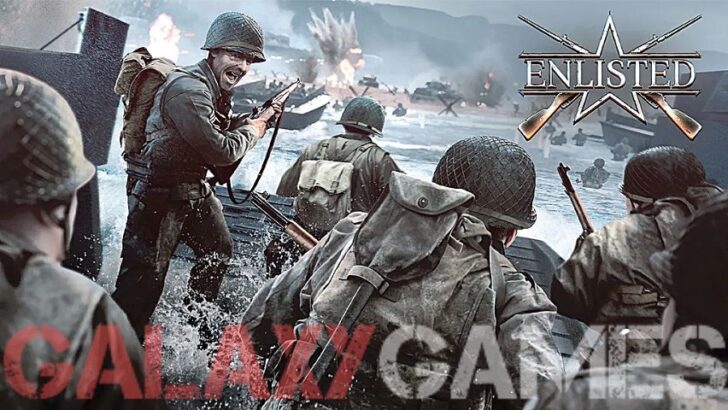 Enlisted is a free first-person shooter, which was created by Darkflow Software. The plot of the game is based on the greatest WW2 battles. If you happen to be a fan of games as well as historical events, our Enlisted game review will be very useful for you. Find out about the game’s cost, system requirements, gameplay, as well as its pros and cons.

What is it: squad-based MMO

General Info About The Game

Enlisted video game was developed for PC, Xbox, and PlayStation. It completely immerses players in a large-scale historical conflict due to the developer’s attention to detail. High-class realistic recoil and graphics contribute to the unique gaming experience.

To download the Enlisted game, go to the official game website by following the link from our site. Moreover, you may install the game from Steam. No matter what device you choose to play on, you can easily download the game as long as it complies with all the system requirements.

Enlisted video game makes money from internal microtransactions. Enlisted is a F2P game (free-to-play), so microtransactions are not intrusive. Moreover, it has its own in-game currency. Almost every item that you can purchase with real money can be bought with the currency of Orders. The list of items that you cannot buy is limited to the Elite Battle Pass, bonuses for premium accounts, unique squads, and squad points.

A high-class game is the one that offers not only interesting and engaging gameplay but also high-quality sound and visuals. Below we will talk about these features in more detail.

Darkflow Studio tried to make the sound effects as realistic as possible and apparently overdid them. Many gamers who really liked Enlisted have only one complaint – the sounds of shots are way too loud and ear-piercing.

Enlisted developers have managed to make great visuals. They made every vehicle, building, weapon, and even uniform authentic. Offering detailed maps and supporting bullet penetration physics are challenging tasks, but the game developers coped with them excellently.

Enlisted gameplay is a progressive story where you control an infantry squad or a vehicle’s crew. You will have soldiers of various specializations, multiple weapons and equipment at your disposal. The main goal of the game is to beat enemies and gain victory on the battlefield.

You can select different characters (bombers, gunners, etc.) to form your squad. However, the game still does not include female units, which goes against real history.

You become a commander of a squad of 3-9 soldiers of different classes, equipped with diverse weapons. You give orders to your crew using AI control, while as the commander you play personally. Enlisted game settings allow you to freely switch between your squad’s soldiers, allowing you to stay at the most exciting point of the battle.

As it was mentioned earlier, players can switch between soldiers in their squad. Each soldier is a specialist in their area. Each specialization has a great impact on the gameplay. There are 12 troop specializations:

During the game course, players can unlock and access new weapons, vehicles, and units. The further they advance in the game, the more they feel the progress and growth of their abilities.

Enlisted is a cross-play game. It means that you can play with your friends using different devices: Xbox, PlayStation, and PC. However, you cannot play in the same squad. You will fight against each other.

Even though Enlisted supports cross-play, it is still lacking in some basic functions. For instance, you can play with other players, but unfortunately, you cannot add them to your friend list or lobby with them.

The Benefits And Drawbacks Of The Game

Games similar to Enlisted that you may like are the following:

Enlisted is a game, which constantly keeps you in suspense due to the eventful plot. Insanely detailed graphics will fully immerse you in the world of WW2. Unforgettable experience guaranteed. Start playing the best WW2-based game now by following the link.

Conclusion Enlisted video game is one of the best FP shooters, which offers great progression and diversity. We recommend it to all fans of old-school battlefield titles, who want to enjoy amazing visuals and an exciting storyline based on WW2.

What Is Enlisted Game?

Enlisted is a free World War 2 MMO infantry simulator. The gameplay is similar to the classic battlefield titles.

Why Should I Play Enlisted?