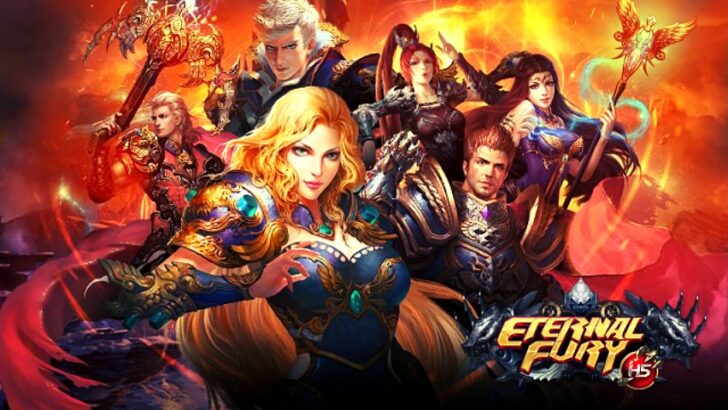 In terms of plot, Eternal Fury recounts an epic conflict between the armies of the Divine Realm and the powers of the Underworld. Only twice in recorded history has the Underworld Gate opened. The Templar Knights order discovered it when it first opened. Before the Templars could infiltrate her world, Hel swiftly shut it. Fifty years later, it was reopened. To rule the divine realm and confine all gods and giants, Hel sent troops made up of undead and demonic.

There are 3 character classes available in the Eternal Fury gameplay. By choosing a class, you can change the gender of your hero and give them a unique name. Unfortunately, the game does not allow you to change the character’s appearance.

According to the game plot, the hero you chose loses their memory and finds themselves in an unfamiliar place. While exploring the map, you meet a character who reveals that you are the commander of the missing squad. Therefore, it is your responsibility as a Prometheus avatar to combat demons and close the Underworld Gates. You build up your city, upgrade your buildings, train soldiers, and summon heroes before engaging in turn-based warfare against a slew of bad entities.

The gameplay is based on completing quests and fighting NPCs. Each quest implies a location with battle passes where you must engage in combat with monsters and defeat the final boss. With a guild system and up to 24 NPCs that you can later summon into the battle, you won’t have to fight alone.

It’s difficult to say how much time is needed to complete Eternal Fury, but its incredible adventures, bloody battles, and clan wars will drag you into the world of Divine Realm for a long time.

The game is absolutely free to play with featured in-game purchases that will help you to speed up the game process.

When replenishing your personal account, you buy crystals, which are called Balens. The minimum required replenishment is $5, which will get you 500 Balens. These are the main coins in the game, which can be redeemed for various in-game items and resources, upgrades, ammunition, weapons, etc.

With the Eternal Fury game, you can get different rewards. First of all, you can receive rewards for daily game logins. Players may get unique Gift Codes that can be redeemed for decent loot. They may obtain an Epic Experience Scroll, a Sack of Gold, a Small Stamina Potion, and a Power Potion.

The game may feature time-limited events with profitable prizes and perks that allow gamers to progress through the levels and win the game. Therefore, the event schedule must be checked regularly.

Where To Play Eternal Fury

Since it is a browser-based game, Eternal Fury should function without a hitch on any PC with an up-to-date web browser. There is no need to download any additional software or programmes.

Even though the game is relatively new, the Internet offers a decent amount of Eternal Fury reviews. Eternal Fury is widely regarded as one of the best web-based games due to the large variety of maps, stunning visuals, the availability of PvP and PvE battles, as well as realistic graphics and authentic sounds. After analyzing all the reviews, we concluded that Eternal Fury is indeed a worthy representative of browser-based games that will keep you intrigued and involved in the gameplay from the early stages.

If you want to try playing similar games, we recommend the following alternatives:

As Eternal Fury is a browser game, it does not require downloading. You can start the game by clicking on the “PLAY!” button on the official website of the game. Do not forget that you need to go through a simple account registration to start playing.

There is no need to download the game, as it is a browser-based game.

What Are The System Requirements For Eternal Fury Game?

The minimal system requirements are listed above in this post.

What Is The Price Of Eternal Fury?

The game is absolutely free, although you can make in-game purchases.