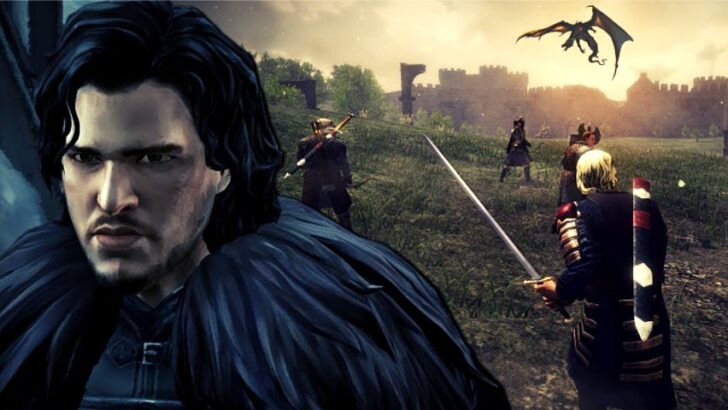 Game of Thrones is a legit action role-playing game that was created by Cyanide Studios. The game is based on a television series of the exact same name. In 2012, it was launched by Atlus USA and Focus Home Interactive for PC, Xbox 360, and PlayStation 3.

Read our Game of Thrones RPG review and learn how to enter one of the most fascinating universes and embark on an exciting adventure.

The gameplay allows players to explore one of the most comprehensive and fascinating worlds in medieval fantasy literature while having a wonderful adventure. A fantastic role-playing game places gamers at the center of a story where vengeance, loyalty, and honour will determine their fate.

Game of Thrones gameplay requires the player to control two dishonoured knights. Both are introduced as Well-Intentioned Extremists, and the player controls how either character responds to the harsh conditions of life in the Seven Kingdoms.

As the game plot develops, the two confront Valarr in the royal room of the Red Keep after overcoming the Bloodseekers. As he is about to pass away, he tells Mors that Alester was present when he killed Mors’ family and that Alester killed his wife while Valarr killed their daughter. Alester is then attacked by Mors. The final mission will be won by the character that was chosen by the player. After that, the survivor encounters Varys, who offers to take Jeyne’s infant to the Free Cities so that it might be nurtured safely there. Overall, there are four possible endings to the game.

As it was mentioned, the player controls two unique characters in the Game of Thrones game – Mors Westford and Alester Sarwyck. Mors Westford, also known as the Butcher, is a Sworn Brother of the Night’s Watch. Alester Sarwyck is a Red Priest who was returning home to collect his fortune.

Cersei Lannister, Varys, and Jeor Mormont, who is a Lord Commander, are other characters that are known to be in the video game. For the final two characters, Conleth Hill and James Cosmo repeat their respective parts from the TV series. Castle Black and King’s Landing are both featured as TV series locations. Riverspring, Mole’s Town, and Icemark, the abandoned Night’s Watch stronghold, are additional locales.

For each of the two main characters, the player can choose the combat style. At the beginning of the game, the player is given 5 points that they may use to increase or decrease attributes such as Luck, Intelligence, Endurance, Strength, and Agility. In addition, the player has a certain amount of Stance Points that allow them to customize the character’s abilities. Skill Points are necessary to tailor the character’s skills. One may choose up to 3 strengths for their hero, but the number of chosen strengths and weaknesses must be equal.

Game of Thrones RPG game offers only one game mode. It is a single-player role-playing video game passed from the third-person view. Since PvE battles are the only ones available, it implies that instead of competing with other players in PvP fights, players face off against the game’s AI.

The plot of the TV series or the novel of the same name is not repeated in the game. Alester Sarwyck and Mors Westford, two unique characters made specifically for this quest, let you see Westeros through their eyes.

The narration in the game is another crucial element. The player must decide how to respond when Mors and Alester speak with other characters. Some responses will just affect the dialogue’s conclusion, but many will have an impact on how the plot unfolds.

The story is divided into 16 chapters, each of which is demonstrated from the perspective of a specific character. Each character has three fighting modes. Mors Westford can be Landed Knight, Hedge Knight, and Magnar. Alester Sarwyk can be Water Dancer, Sellsword, and Archer.

The action in the Game of Thrones single player game happens in real-time. You may use a radial menu without pausing the action to choose an attack. Such an option keeps you moving and engaged in combat while allowing you enough time to form your line of attack. Your move menu is filled with potions, attacking strikes, defensive feints, buffs, and a variety of other skills. The interrupt attack, though, is your most crucial instrument. This immobilizes your adversaries, leaving them open to any incoming barrage of fire. You can start chopping away at your defences once you unlock a few strikes that interrupt.

There are other side missions included with the main tale, and the main storyline is thought to provide 30-35 hours of gameplay. While playing the game’s chapters, you can choose not to complete these side quests. Additionally, there are a few destinations scattered over the map, and you can fast-travel wherever the plot directs you.

Game of Thrones is not a free-to-play game. To enjoy it, players need to purchase it using the video game distribution websites like Steam, where the game’s cost is only 14,99 USD.

Developers do not offer any special virtual currency here. Players may collect coins throughout the game by participating in side quests and exploring the map. However, the gear that may be purchased with collected coins is quite expensive, so players may not have enough time to enjoy and use the purchased gear as the game soon ends.

The game does not offer classic rewards such as equipment or weapons, the supply of which in the game is very scarce. However, players will receive Skill and Stance Points by completing side quests and PvE battles. Such Points may be used for upgrading the character’s skills and abilities to move to a higher level.

Game of Thrones RPG does not provide any loot boxes.

Where To Play Game of Thrones

Players can enjoy Game of Thrones role playing game  on three platforms – Microsoft Windows, Xbox 360, and PlayStation 3. To start playing, it is necessary to download the game from licensed affiliate platforms like Steam or the official site of the game’s developer.

Players note that the main advantage of Game of Thrones is a lengthy and powerful story that comes with multiple plot twists and possible game outcomes. Besides, gamers are highly satisfied with interesting characters and well-written dialogues, which determine the course of the game.

What players dislike is the technical game execution. Most players note that the game design and visuals are average, if not poor. In addition, a decent game narrative is accompanied by a large number of monotonous fights and quests.

If you want to fight side by side with interesting characters, pay attention to the following game alternatives:

Game of Thrones game is available for download from the official site of Cyanide Studios, Steam, and other safe, licensed platforms. To get the game, go to the chosen site and click “Buy Now” or “Buy the Game”. If you play games via Xbox or PlayStation, go directly to the corresponding official marketplace and access the game there.

Do not wait any longer. With low game system requirements, you may download this epic game in no time.

You can download the game on the official developer site, Steam, or other licensed platforms that distribute video games.

What Are The System Requirements For Game of Thrones Game?

System requirements are listed above in our Game of Thrones review.

What Is The Price Of Game of Thrones?