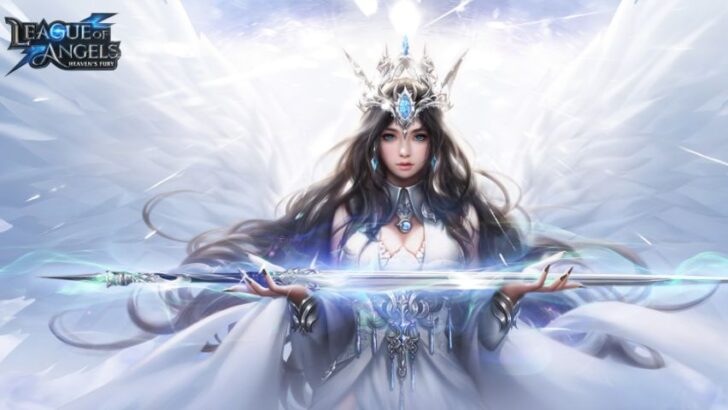 League of Angels – Heaven’s Fury is a ground-breaking 3D massively multiplayer online game, set in a fantasy universe that is partially based on Western mythology. The game was developed by YOOZOO Games and launched in 2020 for PC.

As the acclaimed League of Angels series’ follow-up, the game deserves praise. Amazing 3D graphics, an evocative soundtrack, and an intriguing plot await you.

Learn how to embark on a heroic journey to save the fantasy world by reading our League of Angels – Heaven’s Fury review.

As the chosen one, it is the player’s responsibility to assemble the legendary Angels and restore the Heavens after the gods have succumbed to corruption. League of Angels – Heaven’s Fury gameplay contains countless events encompassing everything from PvE, PvP, GvG, to Alliance and even Cross Server challenges that will never leave bored even the most demanding gamers.

The primary objective of the game is to fulfill missions to reclaim the Heavens and gather the legendary Angels that can protect the fantasy world from destruction by demons and other evil released from Pandora’s box. Every quest rewards you with a specific amount of experience and/or other useful items.

Your level will quickly rise as you acquire experience, reaching 100 in no time. This will severely slow down after a while, even to the point where you’ll need to complete side tasks to get experience so you can carry on with the main plot. There are other ways to obtain that tasty experience, ranging from entering a unique level where you must battle your way through a number of creatures to completing 20 daily quests that are designed for that purpose.

Your first step in League of Angels – Heaven’s Fury legit game is choosing one of three hero classes – Dragoon, Archer, and Mage. You can pick whichever class you feel more comfortable with because each has a unique skill set.

You can change into an Angel of Light or an Angel of Darkness to employ your potent talents when facing foes and bosses. You may select among angels such as Gabrielle, Michael, Apollo, Camael, Athena, Raphael, Usha and Pandora. These characters will compete for your victory together with the main character and improve your combat power.

To raise your battle rank, you must engage in endless battles with powerful NPC bosses that regenerate without pausing every 24 hours and gather great gear and crafting resources. League of Angels – Heaven’s Fury follows in the footsteps of its predecessors by enabling players to improve almost all of their collected items, from the armour to the mount.

League of Angels – Heaven’s Fury is an MMO game, which means players have a chance to interact with a large number of other players. Intense Real-Time PvP provides players with a chance to engage in dramatic real-time combat with players from all around the world. The winner is the one who is able to master their character’s skill set and take advantage of their opponent’s shortcomings.

The majority of battles are set in Manual mode, where you control your hero along with chosen Angels. However, some battles at the early game stage are set in Automatic mode, which means your hero will fight without your direct participation.

According to the Greek mythology that the game’s plot is based on, Prometheus stole fire from heaven and handed it to men. Zeus was furious and created chaos in the world by sending Pandora and the box there. All the world’s evil, such as greed, hypocrisy, libel, envy, and pain, is released when the box is opened, contaminating both gods and humanity.

Therefore, the player’s main goal is to fight the released demons, monsters, and World Bosses to break the Darkness and reclaim Heaven with gathered Angels.

As was mentioned above, first, players must select one of three character classes at the start of the game, complete tasks, and collect experience points to access essential in-game items. With the auto-battling system, certain actions, like moving around the map or taking up new quests, are completed for players.

League of Angels – Heaven’s Fury players may acquire numerous sets of unique equipment for their characters, giving them a stylish appearance with fresh accessories. Through improvement and refining, these can also be upgraded to raise the potential of the armour. Additionally, gamers can upgrade seals, artefacts, giant wings, a mount that can carry them anywhere, a spirit by their side, and other items to boost their character.

This browser-based game is completely free-to-play. However, the game allows for microtransactions for purchasing and upgrading in-game items.

The League of Angels – Heaven’s Fury has three types of virtual currency – Diamonds, Pink Diamonds and Gold. You can easily earn the first two currencies by completing quests and additional missions.

Gold is a premium virtual currency that you may get with real money or during time-limited auctions and game events. With Golden Coins, players may purchase Drama Master, Super Dragon, Condor Fire, Desert Raccoon, Refinement Stone, etc.

By applying these items, one can change the appearance of their hero and boost their skills along with strength, stamina, and defence level.

In addition to plot missions, there are experience dungeons that provide players with various rewards. By killing monsters non-stop for several minutes in such dungeons, players may collect multiple loot boxes with valuable perks. Besides, players may obtain time-limited gift codes that will allow them to receive a predetermined amount of diamonds, pink diamonds, or equipment enhancement stones.

Where To Play League of Angels: Heaven’s Fury

Since League of Angels – Heaven’s Fury is a browser-based game, you may play it on the official site of the game, as well as the Steam platform. The game should work flawlessly on almost any PC with an up-to-date web browser.

The game may still work on outdated hardware or software, but it may negatively influence the gaming experience. We advise using the most recent versions of Chrome, Firefox, or Microsoft Edge for the best gaming experience.

By analyzing the League of Angels – Heaven’s Fury reviews and ratings, we can positively say that the game is definitely one of the leaders on the market of MMO browser-based video games. Those gamers who have already played the game are noting the game’s innovative dual-resource combat system, dynamic gameplay, and astonishing visuals. At the same time, a large number of microtransactions that are necessary for player’s level progress are the cause of players’ dissatisfaction.

If you want to try new games that are similar to League of Angels – Heaven’s Fury, the alternatives listed below will suit your taste and gaming requirements:

You can download League of Angels – Heaven’s Fury from Steam or the game developer’s official website. Since the game is free-to-play, try to stay away from video game distribution platforms that charge you a fee for access to the game.

Where Can I Download League of Angels – Heaven’s Fury?

You can download the game from the game developer’s site or the Steam platform.

What Are The System Requirements For League of Angels – Heaven’s Fury Game?

You can find the list of basic system requirements above.

What Is The Price Of League of Angels – Heaven’s Fury?

Players are not required to spend any funds to access the game since it is free.