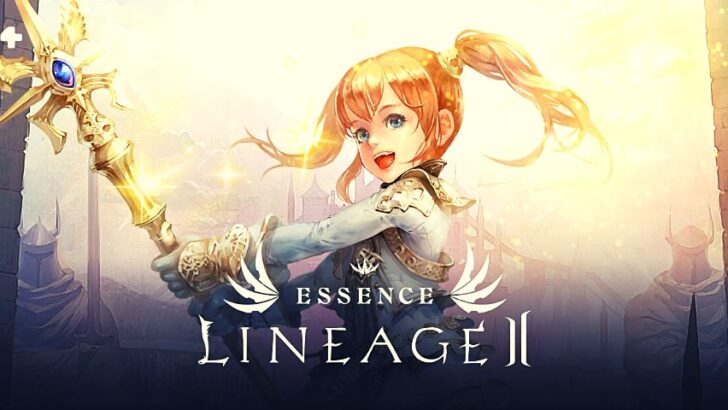 Lineage 2 Essence is a new version of the MMORPG game Lineage 2, where PvP and PvE content can be solo conquered by players. There is only one new class – Death Knight and also a new system for pets. The game was launched by NCSoft in 2019 for PC.

Immerse yourself in the continent of Aden inhabited by elves, orcs, gnomes and other creatures, choose your character from a variety of unique races, master magic and engage in PvP battles and massive boss fights.

Check our Lineage 2 Essence review to learn more about the key characteristics of the game.

Lineage 2 Essence gameplay allows you to immerse into the fantasy world of Aden, design your own hero, challenge other players and see how your own story unfolds. The auto-hunt feature of the game makes it simpler to grind and advance while completing other quests. Essence won’t have you spend hours in front of a screen. Instead, it will employ consumables and skills to grind in zones, giving you the advantage.

The combat in Lineage II Essence is a significant aspect of the game. Monsters can be discovered outside of towns on hunting grounds or buried deep behind dungeons. In order to level up and acquire new talents, the player’s character gains XP and SP when they vanquish a monster.

At the initial stage of the game, players need to create a character. They can customize the appearance of their character as well as the race they belong to. For instance, the player can select features and characteristics like hairstyle, hair colour, facial expression, and gender, among other things.

Each participant must start the game in a temple in the race zone of their character. Overall, there are 7 races – Human, Elf, Dark Elf, Orc, Dwarf, Kamael, and Sylph. All races, except for Dwarves and Kamael, allow players to select between a wizard and a fighter most of the time.

Players have the opportunity to resurrect their characters at the closest town or village if they perish in battle. They can also wait for another player to cast a Resurrection spell or use a scroll to revive them. The cost of resurrection in the closest town is a tiny portion of the experience points earned, which increase exponentially with level. Most of the time, resurrection spells and elite scrolls replenish lost experience, which makes the new PvP battle system more accessible.

Overall, the character development system is Lineage 2 Essence’s initial and most prominent feature. Essence formally permits the use of the auto-battle feature and offers brand-new players kits of boosting consumables that are well-balanced. Additionally, levelling up requires fewer experience points for new-level ranks, allowing players to finish the development in a matter of weeks.

Lineage 2 Essence is a multiplayer browser-based game that is well-known due to its PvP. There are various ways to gauge one’s competitiveness with other players. In areas where PvP is permitted, players can engage in clan fights, participate in large-scale activities like the Siege of the Giran Castle, or just attack or be attacked by others. Players with the highest levels and Noblesse titles can access various PvP tournaments, so-called Olympiads.

Combat mode allows players to attack another character or utilise skills against them by using the attack-force and skill-force commands instead of Ctrl or keyboard shortcuts. In this mode, they are unable to assault members of their party, clan, or command channel (except for chaotic and hostile characters).

Lineage 2 Essence is one of the most well-known and popular Korean role-playing video games. The fundamental components have all been revised and made simpler so that new mechanisms can take their place.

The character development system is one of the most prominent game’s features in addition to the auto-hunting feature, which allows your character to assault targets automatically. Auto-hunting is an excellent way for your character to continue to level up and get new equipment when you aren’t at the computer.

The solo-friendly class structure is another aspect of Lineage 2 Essence gameplay. Characters in this edition can defend, buff and heal themselves as needed, regardless of the class they have selected. While Essence permits solo play up until the endgame level, the classic edition promotes multiplayer gaming and does not imply a single-player playthrough.

The pet system in the revamped Lineage 2 Essence is also one of its best aspects. The game contains powerful mounts and war beasts in addition to minor decorative animals. The majority of them may wear armour, engage in combat, and increase their owner’s stats. Pets use up some of the experience points that players receive from defeating foes as they level up and develop their skills.

Everyone may play Lineage 2 Essence game for free. However, there are also microtransactions involved. The developers prepared a game shop which offers items and boosts that will allow you to progress through game levels much faster.

There are three types of virtual currency in the game. Adena is the main currency of Lineage 2 Essence. It is presented in the form of gold coins that are constantly dropped by monsters you fight. Adena may be used to purchase armour, jewellery, weapons, etc.

Ancient Adena is the second additional currency. You can get it in exchange for seal stones which fall from many mobs in the catacombs and necropolises. The process of accumulating Ancient Adena is quite time-consuming, but items you may purchase with this currency allow you to significantly improve your character.

Coins L is another currency in the Lineage 2 Essence game, which is used mainly for purchasing goods of high value, such as equipment, enhancement, and consumables.

In the Achievement Box UI, there are a total of 4 reward slots available, one of which is accessible by default, and the others can be unlocked for a certain amount of L Coins. Additionally, each Achievement Box has a waiting time before it may be open.

The likelihood of finding unusual goods increases with the basic opening time. It is possible to open a box before the waiting period is up. You must pay the price based on the amount of time left.

In these reward boxes, players may find Devoted Hero’s Circlet, Gauntlets, Gloves, Boots, Ring, Pendant and many others.

Where To Play Lineage 2 Essence

You will be able to play Lineage 2 Essence on your PC using the official website of the game and other legit platforms that distribute the video games. To play the game for free, you must first register an account.

You should confirm that your PC complies with the system requirements listed below for seamless game operation.

Because of its captivating gameplay and excellent visuals, players have given Lineage 2 Essence game a lot of positive reviews. Additionally, thousands of players choose this game due to its PvP-oriented combat system, auto-levelling function as well as fast character development.

Try the following alternatives if you want to enjoy playing similar fantasy MMORPGs:

To download Lineage 2 Essence for your PC, you must go to the game manufacturers’ official website. Simply click the “Play Now” button, and then the game client will be downloaded to your device. To enter the game’s universe, open the file and install it on your computer.

What Are The System Requirements For Lineage 2 Essence Game?

You may check the recommended system requirements for your PC above in our review.

What Is The Price Of Lineage 2 Essence?

The game is absolutely free for PC owners.