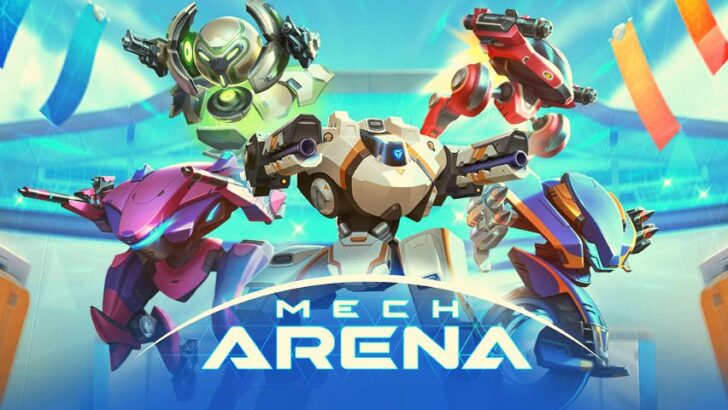 Mech Arena is an arcade shooter multiplayer game which was created by Plarium Global Ltd and launched in 2021. The game is accessible on Android and iOS mobile devices as well as PC. To try to become one of the arena’s champions, defeat waves of enemies, improve your Mech and take advantage of the arena’s constantly shifting terrain. Check out our Mech Arena review to find out whether this game is safe or a scam, and learn more details about the game’s plot and gameplay.

The game has engaging gameplay that allows you to choose and control different types of robots and participate in PvP 5v5 and 2v2 combats.

The main objective of the Mech Arena gameplay is to accumulate as many points as you can while participating in combats to move up to the top of the ranking and take place among the champions. The number and strength of the enemies encountered increase with each new round, and the arena itself expands and gets bigger and harder to use. Players may select from dozens of Weapons and a Mech, each with unique abilities and fight alongside friends or in a global arena of maps, modes, and players.

At the beginning of the Mech Arena game, players should pick one Mech for future battles from over a dozen proposed options such as Paragon, Panther, Ares, Cheetah, Surge, Brickhouse, Aegis, and others. Each mech comes with unique playstyles and abilities such as energy consumption, power rating, HP and speed. Then, players can arm their Mechs with more than 30 unique weapons and select from over 500 special Skins.

Note that Graviton Beam 16 is the strongest weapon available now. With powerful weapons and a utility tool, the player controls a Mech that must survive six rounds in a row while attempting to rack up as many points as possible. Players will be able to upgrade their Mechs and weapons as well as customize their Mech’s appearance and performance using earned XP points.

Players may test their kills playing for territory in 2v2 and 5v5 Deathmatches, or live 5v5 mode called Control Point Clashes in which they are supposed to eliminate five or two opposing teams, respectively. In addition, they may engage in close combat in 5v5 Deathmatches. Different tactics and load-outs are played on each mode and each roadmap. Custom Match mode lets players fight their friends on the maps of their choice, start online matches and organise their own competitions.

Mech Arena is a typical fast-paced PvP shooter video game focusing mostly on combats between robots. Every player should come up with their own strategy that will help them to advance through levels. Each player starts out as a Rookie who has the option to modify their decisions to best suit their point-scoring approach. Players can hire Pilots who will fit their playing style for their Mechs. Moreover, they are able to equip Pilot Implants to develop master specialists in the fields of their choice, such as shortening the reload time or recharging a mech’s abilities.

The fact that this game is completely free is one of its great attributes. Players do not require to pay anything to download Mech Arena to their devices. However, as with any other game, microtransactions allow players to top up their accounts and speed up their process of advancing in the game.

There is a virtual currency in the Mech Arena game of two types – credits and A-Coins. The first one is the main currency that players can get from Tournament rewards, Daily Login Program, Achievements, Vault Blitz and from the Shop spending A-Coins. Credits are used to get access to new Weapons and Mechs from the Progress Path, obtain new Blueprints from the Game Shop and upgrade the level of the player’s Mech and Weapons.

Players need to collect A-Coins if they want to upgrade the Mech’s rank and get Tournament Tickets, Point Boosters, battle passes and Crates. Similar to credits, A-Coins can be obtained from the Progress Path, Crates and as a reward for successfully finishing Daily Event Objectives.

The Mech Arena features special events like Loot Rush, which gives players a chance to win Crates filled with lucrative rewards and perks. A-coins and XP credits are the most common gifts that they might receive.

Besides, players may receive Battle rewards of different categories such as Slayer, Hunter, Sneaky Assassin, Cold Warrior and many others. Each category implies a certain battle task, for example, to defeat enemies from behind, and destroy your enemy Mechs without getting killed.

Where To Play Mech Arena

Mech Arena is a cross-platform game that is accessible for PC, Android and iOS mobile devices. Players may switch between platforms easily and keep their progress synched by using the same account and login data.

For the Mech Arena game to work seamlessly on your device, you need to verify that it is fully compliant with the system requirements presented below.

The Mech Arena game has a decent rating which is 4.3 on Google Play Market and 4.9 on App Store. Thousands of players have given the game favourable reviews. Overall, they enjoy the game’s cross-play function as well as its outstanding visuals and high-quality 3D graphics. The only thing that some players complain about is the necessity of multiple in-game microtransactions to get stronger Mechs and Weapons that are hard to come across during regular Battles.

Visit the App Store or Play Market to download Mech Arena on your iOS or Android device. Type in the name of the game using the search bar. Then, all you have to do is to click the “Download” button and adhere to the instructions. You may also download the game from the official website of Plarium and Steam. Note that the Steam platform will charge you 4.99€.

What Are The System Requirements For Mech Arena Game?

Please scroll up and refer to the detailed system requirements table.

What Is The Price Of Mech Arena?

Mech Arena is free-to-play, however, if you want to purchase the game using the Steam platform, you will have to pay 4.99 €.