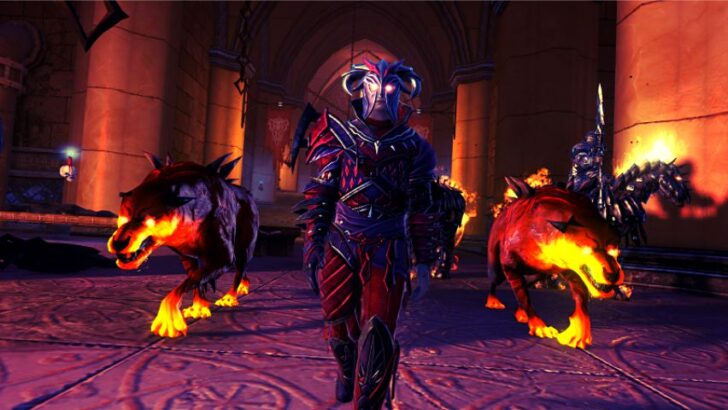 Neverwinter is a free massive multiplayer action role-playing online game that is based on Dungeons and Dragons lore. The game was developed and launched by Cryptic Studios in December 2013. The game was released for such platforms as Microsoft Windows, Xbox One and PlayStation 4.

Read our Neverwinter review and learn crucial details regarding the gameplay, plot, system requirements and characters.

The game takes place in the fantasy city of Neverwinter in the Forgotten Realms. Valindra, who is an undead sorceress, and her army of soldiers are threatening the city. As Neverwinter heroes, players must complete a variety of tasks in order to save the city from impending destruction.

Your Neverwinter gameplay experience consists of but is not limited to exploring the hand-crafted game world, fighting enemies, and completing daily and weekly quests that contribute to your character development.

When players start the game, they are treated to a cinematic depiction of the battle between Valindra and the Neverwinter defenders. Following the intro movie, players can move on to creating their own characters. They can choose from one of 13 distinct races:

Players can then choose one from seven character classes and assemble a group of up to 5 PCs. These classes are:

The Neverwinter gameplay starts with the creation of an account and your character. Despite the cartoony graphics, each character is fully customizable since you can select from a variety of pre-made face and body types, add scars or tattoos, and even use sliders for features like nose height, arm/leg width and length. Since the game is primarily focused on role-playing, players can choose their character’s hometown and affiliations, as well as create a background story, which other gamers can later view.

The player is investigating the Sect Crown of Neverwinter and attempting to determine what the skeletons and another mysterious group are after. Players can also create entirely new locations. This content is clearly differentiated, and users are always aware of whether they are exploring a user-generated or official game location.

Even though the Neverwinter multiplayer is primarily about lore and role-playing, it does have a PvP system which is limited to certain areas. Domination is currently the only available arena where 5 players compete for territory control against 5 other champions. The match is won by the first team that reaches 1000 points. Participating in PvP matches earns players Glory Points that can also be used to purchase PvP gear.

The game takes place in the fantasy city of Neverwinter and its surroundings in the Forgotten Realms. Valindra, an undead sorceress, and her army are threatening the city. At the start of the game, players are dropped outside the gates of Neverwinter. A tutorial complete with voice-overs assists gamers in becoming acquainted with how the game works.

After creating a character and selecting the desired shard, you can start to explore and defend the most popular city in the Dungeons & Dragons world – Neverwinter. The game’s quests range from standard kill-and-collect missions to planting evidence in order to start gang wars.

Quests grant gamers the majority of their experience points and equipment that are essential for reaching the maximum 70th level. Players who reach Level 15 are able to create their own maps, quests, and even entire campaigns.

Both Neverwinter early access and the final version of the game are free to play. Yet, to improve your gambling experience and increase your winning chances, you can make in-game purchases and microtransactions. More information about the in-game currencies you can find below.

Neverwinter’s Zen Market features many useful in-game items such as mounts, boosts, character slots and refining stones. These items may be purchased with Zens, coins that players can get for real money. Note that the above-mentioned elements, along with costumes and coloured armours, are not game-changing.

In addition to gold, Astral Diamonds is another virtual currency of the game that can be collected only by taking part in high-level quests, time-limited events and praying to the gods. Completing a quest at level 11 unlocks Invocation. Astral Diamonds are necessary for improving the character’s skills, and gear purchasing.

Lockboxes are containers dropped at random by enemies throughout the Neverwinter game, or they can be purchased for Astral Diamonds. Enchanted Keys, which can be purchased from the Zen Market, are required to open Lockboxes. They hold a variety of potential prizes, such as mounts, companions, and artefacts. As a rule, gamers may come across Skeletal and Dragon Cult Lockbox, as well as Lockbox of Dark Omens.

Where To Play Neverwinter

Taking into account the Neverwinter reviews left by players and critics on the leading game digital distribution platforms, we can say with confidence that this game has a large number of fans. In general, beginners and professional gamers enjoy the high-quality visuals, fast-paced combat, large selection of character classes and races and ubiquitously streamlined design. In addition, players like that the game’s fantasy world is Dungeons & Dragons-inspired. At the same time, the main complaint is regular errors and technical issues that occur during the game.

The Neverwinter gameplay is based on the set of Dungeons & Dragons 4th edition rules. So, the connoisseurs of Neverwinter will also like these alternatives:

Neverwinter is a legit and safe game that is free-to-play. Therefore, you are not required to download the game to get access to it. You may play Neverwinter on Steam and the official website of the game and Cryptic Studios. Those gamers that prefer to play the game on PlayStation may go directly to the PlayStation Online Store. Xbox One users may also find the game in the official online marketplace.

You can download Neverwinter from Steam, official Cryptic Studios site and online marketplaces of PS and Xbox One.

What Are The System Requirements For Neverwinter Game?

You can check the Neverwinter guide above.

What Is The Price Of Neverwinter?

To start playing the game you do not need to spend any money, since the game is free.