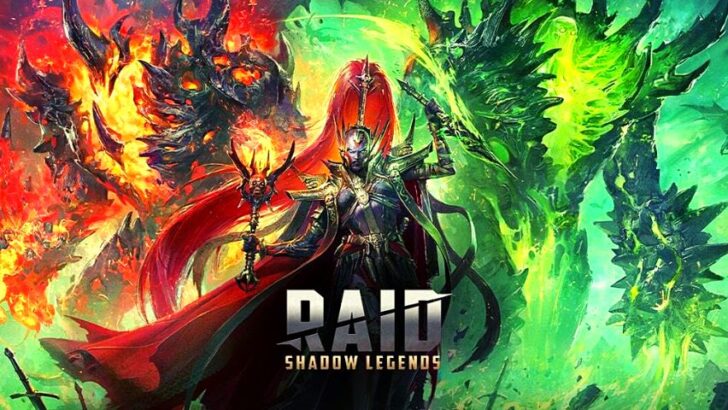 Raid: Shadow Legends is a strategic turn-based RPG game, which was released by Plarium Studios. Professional graphics and character designs quickly made it a popular mobile game around the world. Read our Raid Shadow Legends review to learn about the game’s features, and decide whether it is worth playing.

What Is Raid: Shadow Legends

Raid: Shadow Legends is an MMORPG, which does not disappoint in terms of battle scenes, graphics and visually-stunning characters. A short Raid Shadow Legends guide we prepared below will help you learn all the necessary details about the game.

Originally, the game was released for mobile devices that run on Android and iOS. However, the popularity of Raid Shadow Legends has made its developers release a desktop version of the game.

The first thing that catches the player’s eye is three-dimensional, high-quality graphics. Landscapes, models of heroes, enemies, locations – all this is recreated with the smallest details. Graphics can be adjusted in the menu (low, medium, high, ultra).

For a turn-based role-playing game, the music is surprisingly engaging. The music in the Raid Shadow Legends, both during battles and in the lobby, is excellent.

The controls are standard fare for a mobile turn-based game, featuring a pair of buttons on each side of the screen. This game uses six buttons total: three on the left and three on the right. Auto-Play, Fast-Forward, and More Info may all be accessed from the menu on the left. The buttons on your right reflect your abilities and skills.

How Much Does The Game Cost

The game is free to download, but users will have to spend money if they want to maximize their progress. Donations are needed for in-game purchases. Benefits like experience point boosters, powerful equipment, and summoning shards may be purchased.

The Raid Shadow Legends gameplay is set in Teleria, an old realm which has been conquered by the Dark Lord Siroth. Players play the role of a Telerian warrior who has been resurrected to fight and defeat the Dark Lord and bring peace to the land. Players’ goal is to gather an army which will be used for battles in castles, dungeons, deserts, and temples. In total, players will have to go through 12 levels. Each of these levels has 7 stages and 4 difficulty levels.

There are more than 400 Raid Shadow Legends characters, which are divided into 16 factions. Each hero in Raid: Shadow Legends possesses one of the four Affinities – Magic, Spirit, Force, and Void.

According to the role in the team, the heroes are divided into 4 types:

In addition, Champions are divided into 5 classes according to rarity:

In total, there are 5 game modes in the Raid Shadow Legends:

There are 4 difficulty levels in the Raid Shadow Legends: normal, difficult, impossible, and infernal. Each mode has its own long chain of rewards. As you progress through Campaign Chapters, you’ll earn gear, Silver (the main currency), Rare Heroes, and Summon Shards.

Regions are available in the campaign mode, but to unlock the campaign’s hard mode, you must first complete the game on the standard difficulty. All other challenges can be unlocked in the same way.

The next region of the campaign will become available once you have completed the current one. If you complete all the stages in a certain region, you will earn additional stars, and if you hit a certain threshold, you will unlock some pretty sweet rewards.

The Strengths And Weaknesses Of The Game

All the fans of RPG games like Raid can also try playing the following games:

What are you waiting for? Get in on the action with Raid: Shadow Legends gameplay! Put together a squad of renowned soldiers and oversee their stronghold to emerge victorious. Follow the link on our site now and get to work amassing Champions, levelling up your equipment, and fighting in epic fantasy battles!

So, Is Raid: Shadow Legends Good?

After reading our Raid: Shadow Legends guide, you see for yourself that the answer is “yes”. By playing this game, you continually level up your heroes, test out new sets of gear, and change your team compositions. This is a game with a lot of depth and interesting content, stunning visuals and excellent music.

How Does The Raid: Shadow Legends Game Look?

Raid Shadow Legends looks really captivating. In terms of character designs and menu, the visuals are quite decent.

Should I Get Raid: Shadow Legends?

Yes, it is surely worth your time, as the game offers exciting gameplay aside from exceptional visuals and a soundtrack.

The game can be downloaded from the official game website and Steam.