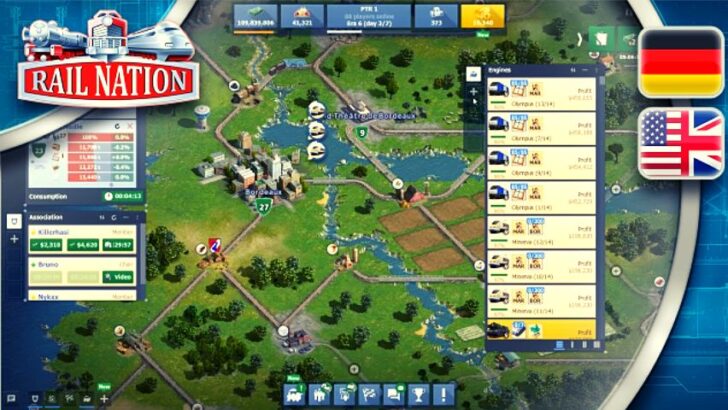 Rail Nation is a browser-based online massively multiplayer game launched by Travian Games in 2014. Due to its cross-play feature, gamers may play the game on a PC and Android and iOS mobile devices. Develop your small town into a thriving Metropolis with other players by strategically delivering goods. Join a group to work together and bring the best city to victory.

Read our Rail Nation review to learn valuable information about the game’s plot and gameplay, ranking and price.

Rail Nation gameplay can catch the attention of both newcomers and dedicated gamers. Stunning visuals, along with an interesting and engaging plot, will not keep indifferent even the most demanding players. Below you will find more information about the Rail Nation’s main objective and game plot peculiarities.

You control the manager of a railroad company in this game. The main goal of the game is to amass as many prestige points as you can before the game is over. You can accomplish this in various ways, including selling goods, investing in businesses, or winning competitions. As the success of your association, city, or region depends on how well you work with other players there, the game heavily emphasises teamwork.

The Rail Nation game starts with you creating an account. You can log in using the chosen email address and password after registering. You must now decide the server you want to start on. The game has servers for several languages, including English, French, and Swedish. Next, you need to choose the game’s location from two roadmap options. You can select the Western Pacific or the Eastern Atlantic Railroad.

You must make your avatar once you’ve chosen which server to begin on. Both your avatar and your in-game name are customisable. You can choose the hero’s gender and appearance.

As you team up with other players, your association may later hire a worker of a certain era. The availability of extra workers can be extremely high, and it can significantly benefit the association’s members. Auctions are used to win workers. A new labour auction begins every four hours, lasting two hours. By moving your cursor over the bid, you can see which members of your own association have contributed. Each era features certain workers, among which you may find such as Christopher Columbus, Isambard Brunel, George Washington, etc.

Rail Nation gameplay is introduced in a variety of modes, each with a different speed:

By selecting any of the listed modes, layers will get to navigate through different roadmaps and landmarks. In addition to a vast variety of modes, the Rain Nation game allows you to develop your empire and compete with other players in PvP quests.

Overall, the Rail Nation features 30 locomotives that differ in years. The game is divided into six separate historical eras, each of which lasts for 14 days (real-time). There is a specific locomotive design for each age. The player starts off with weak steam locomotives, but by the finish line, they will be able to command super-strong, enormous trains.

Additionally, there are fast-forward servers with a four-fold increase in performance and express servers that are two times as quick. In the sixth period, 50 cities must contend. The top 10 towns will enter an endgame before the conclusion of the sixth period, with the winner being the first to deliver all the products.

Rail Nation is an ultimate strategy game and train simulator that can be played and downloaded for free. Nevertheless, some in-game features can be bought with real money.

Rail Nation in-game purchases directly influence the game result. You need to use in-game virtual dollar currency. At the start, the simulator gives you $100,000. You can use these funds to boost the engines, buy trains, iron roads, lottery tickets, and build stations. Besides, with these coins, you can upgrade your buildings to a certain level or receive new skins, as well as sell and purchase goods.

The Rail Nation game’s bonus virtual currency is Gold. The button in the top right corner of the screen allows you to acquire and use gold to buy or boost an engine, hire a mechanic, customise your avatar with new clothes and accessories for your avatar, etc.

You might win a variety of rewards in the Lottery, including in-game money, gold, a 24-hour plus account, bonus engines, apparel vouchers, and more. Additionally, you can receive “coins” that, once you have three of them, can be exchanged for rewards.

The level of the Rail Nation Lottery, which in turn decides the prizes you can win, will depend on how much prestige you have. After collecting bonuses for your members at respective railway stations, you can obtain a lottery ticket. Each time a bonus is redeemed, there is a 1% chance of receiving a ticket. By watching bonus videos at your members’ railway stations, you can also win lottery tickets.

Where To Play Rail Nation

Since Rail Nation is a well-known web-based game, PC users may easily access it on the official game website and play it for free. Besides, there is a mobile version of the game that can be found in the App Store and Play Market.

To install the game on your PC, you must have enough free memory on your computer or laptop. The game client size is 368.88 MB. Windows Surface Pro, 8.0, 8.1, 11, XP, and Vista are required OS systems.

To download the application on a phone or tablet, the Android OS version must be 5.0 or above. In addition, the RAM must be 1.5 GB or more. To install the program on an iPhone or iPad, ensure the gadget’s operating system is 9.0 or higher. The available free memory on devices must be at least 1.2 GB.

Once multiple players and critics Rail Nation reviews have been thoroughly checked by our team, we can say with confidence that the availability of a large number of modes with different speeds and maps are one of the strongest game features. Besides, attractive visuals and sound effects contribute to the magnificent gaming experience, as well as advanced designs of locomotives.

As to the game’s drawbacks, players complain that the economic war engine is plagued with programming errors that significantly slow down the game’s progress.

As of now, players who enjoy playing Rail Nation can try different alternatives, such as:

After reading our Rail Nation review, you can install the mobile game version on your smartphone or tablet using the App Store and Google Play Market accordingly. Download the game on your PC using the official site of the game or safe partner platforms.

Do not hesitate to download the game today and start developing your small hometown into a bustling Metropolis.

You can download the game from the official game site. Players who prefer playing on the go may get the game directly from the App Store and Google Play Market.

What Are The System Requirements For Rail Nation Game?

Detailed minimum system requirements may be found above in this post.

What Is The Price Of Rail Nation?