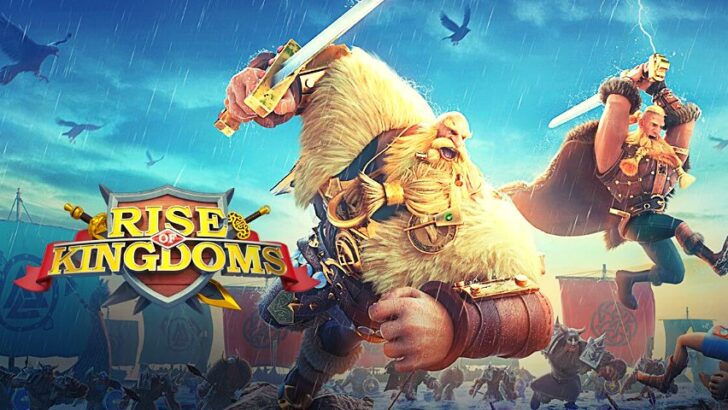 Rise of Kingdoms is an online multiplayer real-time strategy game which is set in a fantasy world. The game was launched in 2018 for PC as well as Android and iOS mobile devices by the Chinese company Lilith Games.

Select one of the 13 historical kingdoms, and lead your civilisation to become a great power from a single clan. Enjoy real-time PVP combats and explore vast maps experiencing unprecedented levels of freedom.

Learn about the main aspects of the game by reading our in-depth Rise of Kingdoms review.

Rise of Kingdoms gameplay gives you an opportunity to become the leader of a specific civilization and develop it to the level of a mighty empire by conquering new territories, defeating enemies and forging strategic alliances. You will be able to start your journey by picking a skilful commander from world-famous historical figures such as Joan of Arc, Julius Caesar and many others.

Whatever strategy you choose, the goal in Rise of Kingdoms is to expand your Town, level up your City Hall to unlock new structures and features, and create armies. Even if becoming the strongest champion on your server can only be done by establishing an alliance and working together with other strong governors, the goal of doing this is to increase your power and dominance.

To build a great city in the Rise of Kingdoms game, one must gather resources such as wood, gold, and stone and build/upgrade their buildings. Troops also play a crucial role as they are used to attack and conquer other cities, defend your city, and collect useful items from the map.

At the initial stage of Rise of Kingdoms, you will need to pick your civilization from 13 options. Each of them differs in terms of style of the buildings and commander. By choosing a certain civilization, you occupy a Town on a random section of the game map.

Your City Hall is the single most significant building in Rise of Kingdoms. Every other structure in this game is based on this primary structure’s level. It is advisable to put your entire effort into improving this structure until you reach level 5, as then you can simultaneously send out two armies thanks to the second march slot that becomes available.

You need a commander if you want to engage in combat. Overall, there are 4 commander classes in Rise of Kingdoms game – Legendary, Elite, Epic and Advanced. For commanders, skills are the most crucial improvement. All commanders have a single active skill, which activates when the wrath meter reaches its maximum value, usually 1000. They might then have an additional three or four passive skills.

Commanders need to raise their star level in order to unlock more skills. Once the skill is available, commander sculptures can be used to increase it. However, before activating other talents for almost all key commanders, you should level up their initial skill to level 5.

Barbarians, Holy Site Guardians, a few other neutral units, and Experience Tomes are among the opponents that commanders acquire experience through combat. By sacrificing sculptures that are either exclusive to that commander or are general sculptures, star levels can be unlocked.

In the game mode called “Expedition”, governors can compete in staged fights with an AI to earn rewards. There will be one or more enemy commanders and their marches at each mission target. A mission’s star rating will be determined by how many of the mission requirements were satisfied after it has been completed.

Rise of Kingdoms also features PvP battles where players have to repel the other players’ incoming attacks and conquer their cities, as well as PvE battles where they are required to defeat Barbarians and destroy Barbarian forts and Holy Sites.

As was mentioned earlier, the Rise of Kingdoms game is set in a fantasy world. To familiarize new players with the game principles, the game begins with a brief tutorial.

You have to select a civilization and become a leader of a Town with a few villagers who suffered from wars and hunger. To engage in the construction of your settlement and the development of your armies, you need to select a commander. When your primary commander reaches three stars, you can give them a secondary commander to report to while marching. Secondary commanders play a partially supporting role, only utilizing the skills that have been unlocked. Skill trees and secondary commander skill specializations have no impact.

To complete the game’s main objectives, including building upgrades, military training, and research, you need to collect resources by exploring the map and fighting Barbarians. The three structures that produce resources are the farm, the lumber mill, and the quarry.

Rise of Kingdoms features two basic categories of buildings – Economic and Military. Farms, timber mills, quarries, gold mines, academies, and storage facilities are all included in the Economic class of structures. Military structures, as the name implies, deal with soldiers. This class includes barracks, an archery range, a stable, a tavern, a scout camp, a hospital, and a siege workshop.

A significant aspect of the game is protecting your Town and its resource base. It is suggested that you pay attention to the Watchtowers and upgrade the Wall to stand a chance against the attackers.

Rise of Kingdoms is a free game that may be downloaded on PC and mobile devices without any extra costs. However, it involves microtransactions for those players who want to speed up their game progress. The game manufacturer developed an in-game store where players may purchase gems, upgrades, etc.

The main virtual currency of the Rise of Kingdoms is gems. They may be used to speed up the production of units or to complete city construction. The best possible way to spend obtained gems is to invest in VIP levels which can offer diverse lucrative rewards. Purchasing gems with real money is the quickest way to acquire them. However, there are other ways to get gems, such as fighting Barbarians and sending your troops to places on the map known as “pile of gems”. Remember that before you do that, you need to unlock the appropriate upgrade called “Jewellery”. Since the main objective of the game is the City Hall development, the in-game store does not feature any skins for character upgrades.

By visiting a Legendary Tavern, you can collect chests with a variety of rewards. In two different sorts of chests, Gold and Silver, you can find resources, boosters, jewels, etc. You should also keep an eye on daily rewards. Besides, you have a chance to receive additional gems by connecting the game to your Facebook account.

Where To Play Rise of Kingdoms

Rise of Kingdoms is accessible for PC users as well as users of Android and iOS mobile devices. To play the game on your PC, you need to visit the official website of the game. Those players who prefer to use a smartphone or a tablet need to download the game using the App Store or Play Market.

Even though the game allows for PvP battles, it is not a cross-platform game. The absence of a cross-play option means that players cannot play the game on different platforms simultaneously.

The Rise of Kingdoms game won’t function properly on your device unless it complies with the game’s system requirements.

As for mobile devices, the system requirements are the following:

Rise of Kingdoms can boast of a large number of positive reviews. Only on Google Play Market, the game got 4.4 points, while the App Store gave it a 4.5 rating out of 5. The majority of players who have been playing this game speak positively about the game’s multitude of events, advanced game mechanics, a great variety of historical commanders and civilizations to choose from and colourful visuals.

Here are some alternatives to consider if you enjoy real-time strategy games like Rise of Kingdoms:

Since Rise of Kingdoms is legit, it is absolutely safe to download the game from the Play Market or the App Store, based on what mobile device you are currently using. Find the game title using the search bar and install the game.

PC users may download the game client using the game developer’s site or the official website of the game. Make sure your PC is compliant with the system requirements of the game. Keep in mind that the Rise of Kingdoms is F2P, so the download is not actually required.

You may get the game on your PC from the main website of Lilith Games and the official site of the game. Mobile users are required to use the corresponding marketplace.

What Are The System Requirements For The Rise of Kingdoms Game?

You may check the table with the system requirements for different devices above in our Rise of Kingdoms review.

What Is The Price Of Rise of Kingdoms?

The game does not require you to pay any fees as it is free to play.