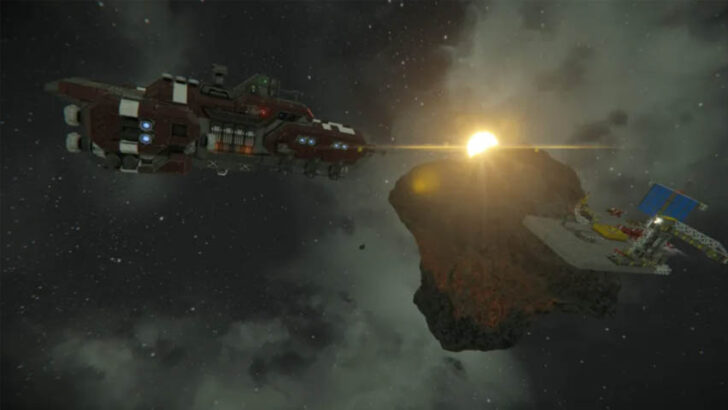 Space Engineers is an open-world strategizing game with 3D graphics.

It is a sandbox game about engineering, construction, exploration, and survival in space and on planets. Players build spaceships, wheeled vehicles, space stations, planetary outposts of various sizes and uses (civil and army), pilot ships, and travel through space to explore planets and gather resources to survive. You can register and play on the official website of the game.

So what this game can bring into your life? Let’s check it on this 2022 Space Engineers tutorial!

What is the game Space Engineers?

In 2013, the initial developmental release of the game joined the Steam early access program. During the following years of active development, Space Engineers sold over one million units. If you want to know more, then read the whole Space Engineers review done with our specialists.

Programming in Space Engineers is done with the Programmable Block which can be given scripts written in C# (pronounced C Sharp).

The game can be played either in single or multiplayer Space Engineers mods. Scenarios – offer a linear story with action-packed gameplay, while the majority of Space Engineers scenarios feature unique sandbox environments where players create their own challenges.

Wondering if your computer will run the game “Space Engineers”? Don’t worry, our specialists have specially selected System Requirements for you and divided them into 2 categories: minimum and recommended.

The minimum is enough for the game to work normally, but if you want a better experience while playing, then we advise you to have the recommended System Requirements.

You will have unlimited resources, instant building, and no death.

You will have realistic management of resources and inventory capacity; manual building; death/respawn.

There are three types of weapons in Space Engineers: Hand-held Weapons — Items such as handguns and rifles for the engineer; Block Weapons — Weapons built into ships, rovers, mechs, or stations; and. Player Built Weapons (PBWs). Also, the game has a lot of Space Engineers mods. You can check them here.

How to Build Ship in Space Engineers?

In this item, you will receive instructions on how to build ship in Space Engineers.

What Ores Do You Need To Start?

After starting your new ship, you can start adding more blocks to it. Armor blocks are your basic building block, used for structure and damage protection.

Your ship will also require a Cockpit for control, Thrusters for movement, a Reactor (or other power sources) for power, and a Gyroscope to allow rotation.

Make sure to install thrusters for all directions. If you miss a direction, your ship won’t be able to move in that direction (or stop itself from moving in the opposite direction).

If in zero gravity, once your ship is powered and has thrusters facing in all directions, you can safely remove the starting landing gear as the ship’s Inertial Dampeners will stop it from drifting away.

You may also want to add a Cargo Container for holding items.

Obtain Materials, either by:

As an engineer, don’t be afraid to change and modify your ship to meet your changing needs.

If you need better acceleration, add more thrusters or upgrade to larger ones. If your Power Usage sometimes reads “overload”, you may have to add extra power sources. You can add or remove drills, welders, or other utility blocks as required.

Add some Landing Gear to prevent the ship from being damaged while landing and to allow you to lock it to a surface, so the ship won’t float away.

The Gyroscope is important since it rotates your ship, allowing it to yaw, pitch, and roll.

The Spotlight is a block that can be added to large and small ships and stations. Much like the Interior Light, it is used to provide illumination. Unlike the interior light, however, the spotlight is best suited to use on the outside of ships to function as a flood lamp or headlights.

The spotlight has a hefty impact on game performance compared to other items and can put a strain on some computers, so use them sparingly. If the light behaves oddly, check Options > Graphics Options > Light quality.

Pressing ‘K’ when seated will open the Control Panel, allowing access to the controls for functional blocks in the ship.

When you drag & drop the remote control block from the config menu into the hot bar, you’ll get a context menu for what action you want the hotkey to perform. Select “Control”.

In the game, a lot of things are done magically. We have collected the advantages in a table for your convenience.

From the minuses, it happens that there are performance failures (lag) in a single game.

So, glitches can usually be caused by: large and complex ships moving near asteroids or other ships. Too many floating objects in a small space. Too many gatling guns, rocket launchers, explosions.

StarMade is an open-ended sandbox game for the PC. During its ongoing alpha phase, it’s a free-to-play title, with pre-purchase of all later versions being available on platforms such as Steam, or the game’s website. It offers both single player and multiplayer game modes.

The game puts the player in a very large, randomly generated universe. They then need to build themselves a ship with various blocks and then find out what they want to do. The entire game is made out of blocks, much like Minecraft, which is one of its inspirations.

Immerse yourself in the open-world game Space Engineers! Her creative and research side will help you in this.

It’s a sandbox game about engineering, building, exploring, and surviving in space and on planets.

With different survival modes, you have no limits on what you can build, use and explore.

In this Space Engineers game review, you explore that Space Engineers is a game about space exploration and engineering solutions to problems. Using the game’s many functionals blocks, you can manipulate voxel terrain, mine, build, and trade with factions. With mod support and a massive library of mods available, this game has taken up a life that the developers didn’t even consider.

You can build custom ships and rovers with your mind as the limit for detail. There are small and large grids to work with, each with benefits and drawbacks. Also, you’ll need to be careful because the voxel system includes soft-body physics deformation from damage. You can leave yourself stranded on an asteroid if you aren’t paying attention.

There are planets as well, though significantly scaled down from real-world counterparts. With that said, they are plenty big for exploration purposes, and you can even make your own planets as a mod for others if you know what you are doing.

It supports multiplayer play, though you’ll want to be aware that some things get a bit clangy when servers are involved. That’s a term for potential spontaneous, unplanned disassembly.