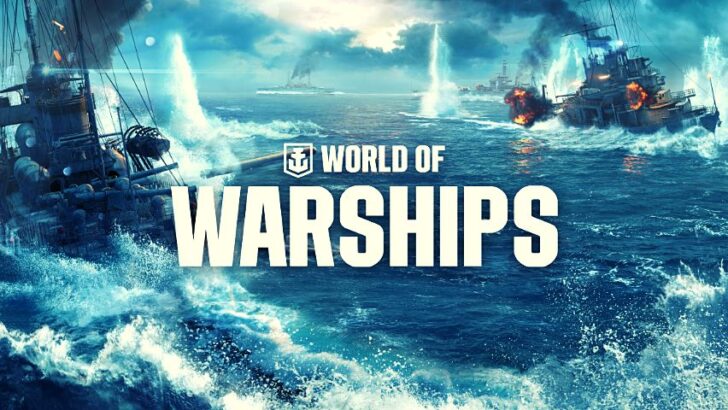 World of Warships is a massively multiplayer online game with a focus on naval combat. It was released in 2011 by Wargaming group for PS, PlayStation 4, Xbox One, iOS and Android. This game allows you to immerse yourself in the world of naval battles and arrange an armada that includes 400+ ships from the first half of the 20th century.

Read our detailed World of Warships review and find out about the aim of the game, its plot and available modes.

World of Warships’ greatest value is its astonishing visuals and well-developed gameplay wrapped in an engaging game that can provide hours of entertainment.

The main objective is to either seize the enemy base or annihilate every enemy warship. Up to three players may create a division within a team and join forces to engage in combat. Various strategies and many tactical solutions, such as sudden attacks and one-on-one matches, will help to win the Battle.

The first stage is downloading the game and creating an account. Then, you need to choose the type of ship for playing. The game features 5 types of ships with a unique style of play: Destroyers, Aircraft Carriers, Battleships, Submarines, and Cruisers. World of Warships also features navies of major naval powers such as the United States Navy, the Imperial German, Russian and Japanese Navy, the French Marine Nationale, and many other European navies.

The research and acquisition of ships from each tier allow players to advance through the game. Experience is required to access some of the modules that are unique to each ship. Modules can be mounted after being purchased with credits and unlocked with Experience. The player can purchase the next ship in the tree by using Experience and credits once a ship’s modules have been fully researched.

Note that each battle can last a maximum of 20 minutes.

The warships featured in the World of Warships gameplay span the early 20th century, during the development of dreadnought battleships, up until the 1950s, and many of them were designed but never built. Players can cooperate as a team because the gameplay is team-based. Divisions can be created within a team so that groups of up to three players can join forces and engage in combat.

Each ship is given a tier to facilitate balanced matchmaking. Tier I is at the bottom of the ten-tier system, and Tier X is at the top. Except for a few, every country has a tech tree, with smaller navies having just one branch and larger navies having branches for every type and a ship of every type at most tiers. The game has 7 levels. You will move from one to another according to the number of battles played and your champion’s rating.

Battles arise on a confined number of specific maps, each depicting a different location with certain geographical layouts, typically featuring multiple islands of different sizes. These maps may have a static or dynamic weather system. Furthermore, some maps are exclusive to a specific game mode.

Both beginner and professional gamers choose the World of Warships game as it is free to play. Even though the game is not pay-to-win, in-game purchases may significantly improve their game progress.

The main form of payment in World of Warships is credits. They may be used to hire new commanders and purchase unlocked tech tree ships, upgrades, and even modules. Moreover, they can be used to pay for servicing and resupply costs following each battle. Credits are earned by participating in battles, premium shop bundles, or special missions.

The Doubloons is the game’s equivalent of the Gold. This virtual currency can have a significant impact on a player’s gaming experience as it accelerates progress in nearly every game stage. They can be obtained by completing diverse in-game contests and missions, and players may spend them on purchasing premium time and port slots and retraining a new ship commander.

One more in-game currency that is essential to players who want to win is Experience which is measured in Experience Points. Same as credits, they can be collected by participating in battles and certain missions.

Players will no longer need to complete multiple daily missions to receive rewards. Instead, they must reach a daily Experience threshold to receive three free Reward Boxes, which contain rewards such as Expendables, Signal Flags, Credits, and a Random Item.

In addition, the game has numerous rewards, such as tokens, coal, steel, oil, etc. You can earn these rewards by completing bonus tasks in the game and destroying specific enemy ships.

Where To Play World Of Warships

You can play World of Warships on your PC, PlayStation 4, and Xbox One, as well as mobile devices with iOS and Android operating systems. However, the mobile version of the game has a different name – World of Warships Blitz 3D War.

Based on numerous game reviews posted on the most reputable video game digital distribution platforms, one can definitely state that World of Warships is legit and far from being a scam game. Players that have already played this game are more than satisfied with slow-paced combat, engaging gameplay that is easy to understand for newcomers, and intuitive mechanics in addition to the massive selection of ships and commanders. Simultaneously, some users lack active actions in this game. Users emphasize that this game is less dynamic than, for example, World of Tanks.

Players who enjoy playing World of Warships and are currently looking for new game alternatives can try playing the following games:

You can play or download the World of Warships directly from the official game website, as well as from the Wargaming site. Moreover, you may download the game from safe and licensed platforms such as Steam or EpicGames. The mobile game version may be installed on your smartphone or tablet from the App Store or Google Play Market.

You may install the game using the official Wargaming website or Steam. Besides, World of Warships Blitz 3D War is available in the App Store and Google Play for players who like to play on the go.

What Are The System Requirements For World Of Warships Game?

The detailed system requirements table can be found above in this post.

What Is The Price Of World Of Warships?

Generally, the game is free. Nevertheless, some platforms, Steam included, may charge you a small fee.